The so-called Porta Venezia, which is not a door at all 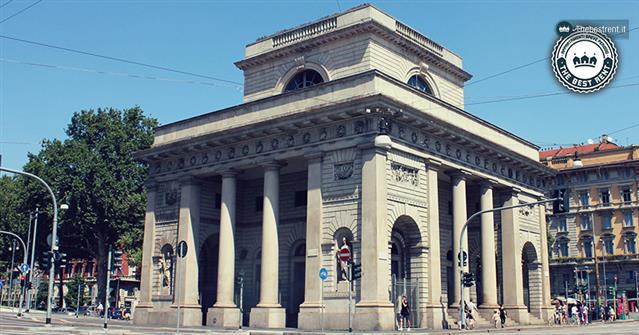 “I’ll see you in Porta Venezia”
“Ok, but where exactly?”
“Oh well, just next to the door”.

Error, error, error. Many of us have done this horrible mistake that would make any guide shiver with disgust. In fact, the door (porta in italian) is not a door at all. It doesn’t even look like one. There was a time, however, when there was a door called Eastern Gate, the one Alessandro Manzoni describes in his masterpiece I Promessi Sposi.

This door, during the Roman, Medieval and Spanish domination, had a defensive function, while in the eighteen century it was used merely for the collection of duties people had to pay to get into the city. Then came the aforementioned Piermarini, who was already in charge of the modernization of the city walls (bastioni) and the realization of the Giardini di Porta Venezia. Even if he completely lacked of spare time and probably his wife hated him, he decided to start another project and began to plan a renovation of the door in a neoclassical style, in order to make it look like a true artistic monument. The project started with Piermarini but was carried out only under Melzi d’Eril’s reign, when the door was renamed Porta Riconoscenza. Yes, it was carried out but no, it was not completed: a temporary arch was built for the arrival of the Viceroy Eugene de Beauharnais and then another one for the arrival of the Austrian Emperor Francis I. Both times, the architects failed to translate their temporary archs into a real, permanent structure.

What you see today are the toll houses built between 1827 and 1828 by architect Rodolfo Vantini Brescia. Still no permanent door was built, but rather another temporary arch, this time in wood, in order to celebrate the Austrian Emperor Franz Joseph’s arrival in the city. In 1860, the non-door was renamed Porta Venezia, to honor the city that remained under the Austrian heel after the Second War of Independence.  Since then, nobody has thought about building another door. Yet, we all continue to refer to the toll houses as the “door” as if in our minds all those temporary constructions have materialized in an invisible door that allows the access to Corso Venezia every day.