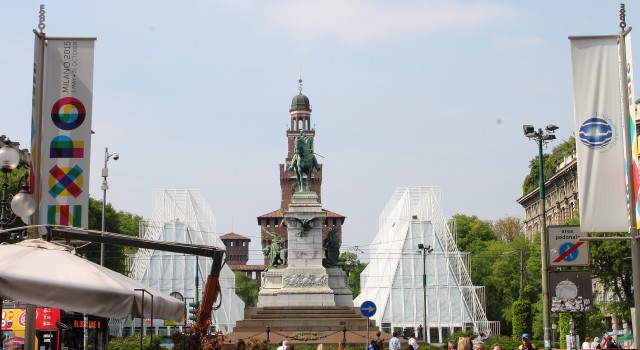 There is no much time left to May 1, 2015, the day in which Expo2015 will be officially inaugurated. For a long time, the streets of Milan have not revealed in any way the imminent arrival of the universal exposition: there were no signs of work in progress, neither of sites, nor of indications of future installations. The citizens, discouraged, began to be alarmed and throughout the city, from the hidden alleyways to the larger squares, everyone could feel the anxiety peppered with puffs of dissatisfaction: “Te vist’ Luisa? We will make such a good impression…” Te gh’è rajun Ambrogio… I wonder how they plan to start and finish everything in such a short time” “All the world will laugh at us. “

But suddenly, when Luisa and Ambrose had already lost confidence in the administration of Milan, bulldozers, trucks and construction sites began to pop out: Milan is finally getting ready to welcome the 21 million visitors expected.

Let’s have a look at the places already designed to Expo2015.

The exhibition site is located in the north-western area of Milan, it occupies a surface of 1.7 million square meters and it is developed over two axes: the first is a one-mile-long path where, twenty meters apart one from the other, visitors will find the stands of the countries participating at the Expo; the second, perpendicular to the first, will allow the conjunction of the first with green areas and other facilities.

The pavilion of Rho will host:

La grande piazza: a square placed in the intersection of the two axes, as big as Piazza della Scala and surrounded by a canal

The Open Air Theatre: approximately 11,000 people will be able to sit on its lawn or stand to watch concerts, shows and ceremonies

The Expo Center: made ​​up of an auditorium and a performance area.

The pavilion Zero: where visitors will get to know all the agricultural changes man has made since his first appearance on the planet earth.

The Biodiversity Park: plants, crops, orchards, gardens and digital installations will welcome the visitors and show them how men produce food in the different part of the world.

The Children Park: a playground dedicated to children.

The Future Food District: it will present the possible future scenarios related to the world of food.

Expo Gate: the doors to Expo2015 in the heart of Milan

If Luisa and Ambrogio used to complain about the absence of work in progress, probably they are now complaining about the presence of the first finished works. We’re talking about the Expo Gate, or in other words the two white towers in front of the Castello Sforzesco.

Leaving behind the Milanese negative comments (“we have a beautiful view in Milan, that of the façade of the castle and they put in front of it these two weird transparent pyramids? Are they crazy?”) we have tried to figure out the purpose of the Expo Gate. Opened in May 2014, it was conceived as a place of meeting-confrontation and as a symbolic gateway to the content of Expo 2015.

Why in front of the Castle? Simple, to create an imaginary line connecting Expo2015 to Expo1906 which had its epicenter at the Castello Sforzesco.

What does it contain? For now, entertainment areas for children and adults, also with ping pong tables, an info point and an outdoor garden where zucchini and corn are growing.

One of the symbols of Milan are the channels (Navigli) and food can not exist without water… there it is one of the characteristic elements of Expo 2015: water! The main project involving water is the Navigli restoration that should allow the creation of a blue circle path full of green areas reaching the Parco del Ticino and the Parco Reale of Monza.

These works, in addition to those related to Naviglio Grande, Canale Villonesi and Darsena, include:

the northern waterway: connecting Villoresi Canal to the exhibition site and flanked by a green path of over eight kilometers

the southern waterway: connecting the exhibition site to the Naviglio Grande

For the time being, these are the spaces that Milan has devoted Universal Exposition and that are plain visible to the city dwellers…but soon, an unlimited number of other installations will rise. Follow us to discover them!

For more information visit our webpage dedicated to Expo 2015