San Marco Church: paying hommage to Venice in the center of Milan 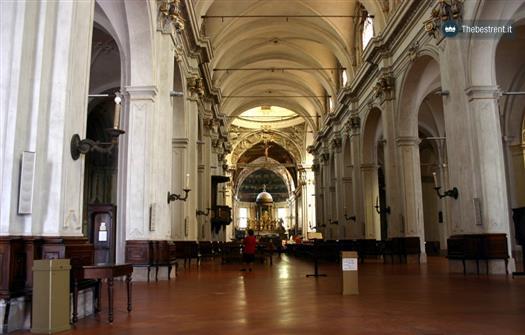 The St. Marco pond (or El Tumbun as we call it) was one of Milan harbors: its location was strategic for the newspaper Corriere della Sera that had (and still has nowadays) its headquarter in Via Solferino. El Tumbun is no longer there but, apart from tar and skyscrapers, something in the scenario has remained intact, and this something is the San Marco church. The church was probably built as a symbol of gratitude towards Venice (St. Marco is its patron) that helped Milan in the fight against Barbarossa. The earliest records date back to 1254 when Lanfranco Settala, General Prior of the St. Augustine Heremits, built a gothic church incorporating older buildings. The main façade, tripartite and with a large rose window made of bricks, was rebuilt in a neo-gothic style by Carlo Maciachini.

The church contains many masterpieces. First and foremost, there are Giovan Paolo Lomazzo’s frescos Teoria degli Angeli and Storie dei Santi Pietro e Paolo; the viewer’s attention is then captured by the right transept where he can see the Fiammenghini’s frescos (the Fiammenghini were late Renaissance artists). Other work of arts are easy to spot in the presbytery: Albertolli’s neoclassical altar, Camillo Procaccini’s canvas La disputa di Sant’Ambrogio and, in the apse, Genovesino’s Arbor Ordinis. Have a tour and keep in mind that the church aisles were trampled by Mozart’s (who lived here) and Verdi’s (who directed a requiem mass in honor of the first anniversary of Manzoni’s death) boots.