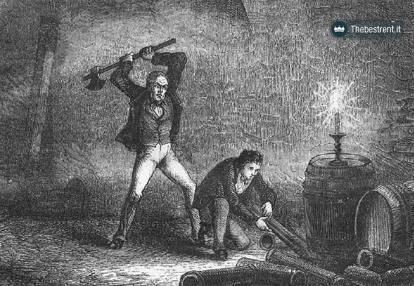 Considered as the first serial killer in Italy, Mr. Antonio Boggia terrified Milan streets, earning the nickname of the Monster of Stretta Bagnera, one of the side streets of Via Torino where he carried out his murders in the XIX century. The reason of the killings was always his greediness, as he was pushed by the desire to take possession of his victims’ wealth. Despite his criminal record, especially frauds but also an attempted murder, he had always managed to get away with his crimes.
When he moved to Milan, he met Ms. Ester Maria Perrocchio, one of the unlucky ones who experienced Mr. Boggia’s homicide fury. She was the owner of the building in Stretta Bagnera where Mr. Boggia used to live.

The first murder dates back to 1849, in order to rob Mr. Angelo Ribbone, whose corpse was hidden in the cellar. In 1860 the son of Ms. Perrocchio reported his mother as missing, so that the police authorities started the research.
Following the investigations, Mr. Boggia was the main suspect. As further proof, a false power of attorney, which left all the woman’s riches to the Monster, was discovered.
After hearing more testimonies, the police searched his apartment where they found the body of Ms. Perrocchio hidden behind a wall in a niche of the warehouse. In addition, two more powers of attorney were found: the first one was Mr. Angelo Ribbone’s, the second one referred to a shopkeeper, Mr. Pietro Meazza, who had been gone missing for a long time.
Searching the cellar, the police found something even more disturbing: there were three corpses under the floor, not only two as they had expected. The third one was Mr. Giuseppe Marchesotti, another victim of the Monster’s trap. All the victims had been killed using an axe, also found in the cellar. Mr. Antonio Boggia was immediately arrested and sentenced to death.

Nowadays the side street where the murders took place is thought to be hunted: it’s said that the wind blowing in the street is the spirit of the murder that still echoes.