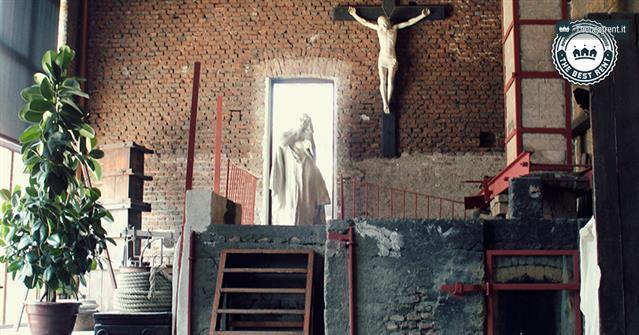 It was the year 1830 when Herman and Prospero Barigozzi took over the management of the existing Foundry Eugenia. From then until its closure, the foundry has always remained in the hands of the Barigozzi family. Specialized in the production of bells, the foundry is a unique place in Milan.

Enter the courtyard and head to the left. The first room that will open in front of you is the one that precedes the casting pit, while the second floor hosts the great oven surrounded by wales of wood and bronze. The last of the Barigozzi has renovated everything in a conservative way, thus without altering the original style of the place. “As you can see, the locks are still the originals!” jokes Valeria, Barigozzi’ helper, while trying to open one of the two small doors next to the great oven: one door opens onto a room dubbed paradise because it contains plaster casts of saints and martyrs that were placed on the bells as ornaments; the other collects photographs of the foundry from the beginning of the activity until its closure, occurred in 1970.

Valeria has told us an anecdote that left us open-mouthed : “Do you know the statue of Vittorio Emanuele in Piazza Duomo? Of course you do… well… it has been done here!“. The foundry and its rooms smell of plaster, wax and wood: they treasure a part of the history of Milan…  make sure to call in first to make an appointment!