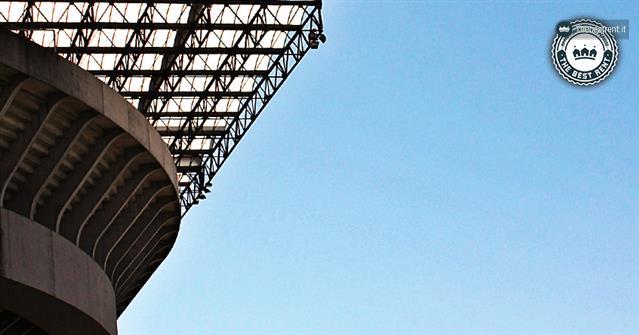 A famous Italian singer, Francesco Guccini, tunes the following lyrics when referring to the stadium:
“ It’s like a scream that you can’t fully understand and that overwhelms you with a vague sense of infinite”. We fully agree with him: the Giuseppe Meazza Stadium, better known as San Siro, is the most capacious stadium of Italy, with a total of 81.227 seats, and stands out, immense, marvelous and solid, in the sky of Milan.

Opened in 1926 with the Milan-Inter derby (finished with a score of 3-6), it only costed five million lire (the old Italian value) and paralleled the construction of Milan’s first red light and radio station. It is interesting to remember that one of the architects, Mr. Stacchini, feared that the Italian passion for football would have quickly expired, and that therefore his creation would have soon lost its importance. His friend, Piero Pirelli, the then-president of AC Milan, reassured him by telling him that the love for football would not die easily in the Italian hearts… and actually, as confirmed by the stadium affluence (more than 150.000 people every year), he was right. In 1996, a football museum was built inside the stadium: it is full of Onorato Arisi’s private collection items which tell AC Milan and Inter histories through historical shirts, cups, trophies, shoes and much more.

The “vague sense of infinity” mentioned by the singer is even more noticeable if you visit the stadium in the afternoon instead of during a game. You will see it plunged in an surreal silence and with its balconies emptied by the fans and their colorful flags: you will feel as if sinking in a magical atmosphere and you will understand exactly what the singer means.