The Castello Sforzesco and its past dwellers 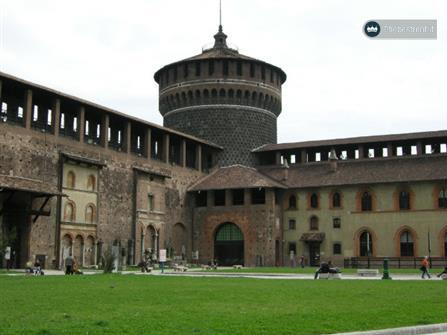 Together with the Duomo, the Castello Sforzesco is probably the monument mostly appreciated by the people of Milan. The story behind the Castle is long and tangled and knowing it means knowing the story of Milan itself and of its power changes.

The first family that saw his name linked to the Castle is that of the Visconti. In particular, Galeazzo II ordered the construction of the Castle (called back then of Porta Giovia) with a merely defensive function. The work continued with his son, Gian Galeazzo Visconti, first Duke of Milan, who moved here his residence and built the Barcho, the hunting reserve (now Sempione Park). When, in 1447, Filippo Maria, the last of the Visconti, died without legitimate heirs, the citizens of Milan proclaimed the Ambrosian Republic and attempted to destroy the Castle, symbol of the power, using then its stones to restore the walls of the city.

Three years later, the Sforza came by: Francesco and Filippo Maria’s daughter, Bianca Maria Visconti, rebuilt the Castle in a Renaissance style, giving to it its contemporary look. In order to realize a façade that could be appreciated by the citizens, Francesco Sforza commissioned the great Florentine architect Antonio Averlino known as Filarete, who built the Tower positioned at the central entrance (and the Ca’ Granda!). His firstborn Gian Galeazzo Maria Sfroza ordered the construction of the Rocchetta, the original part of Porta Giovia Castle, while his brother and successor, Ludovico il Moro, called to his court Leonardo da Vinci and Bramante to adorn the rooms… in this way the Milanese Renaissance began. Bramante’s Rocchetta arcades can still be admired today as well as the famous Hall of Aces painted by Leonardo.

With the fall of Ludovico il Moro, in 1499, a period of foreign sieges and conquests began.
First, it was the turn of the French: with them, the Castle was partly destroyed; the Filarete’s Tower, for instance, was used as an ammunition deposit  and exploded because of a lightning.
Then, in 1535, came the Spanish and transformed the Castle into a military forte, making it a section of the new and reinforced city walls.
In 1706, Milan fell under the Austrians, who appointed a merely military function to the Castle.
The Castle was again partially destroyed with the arrival of Napoleon in 1796, who demolished some external structures and turned some of the interior rooms into stables…. imagine those wonderful frescoes admired by horses!
The Castle conditions did not improve when the Austrians came back (1815-1859): the rulers used it as their headquarter, and once defeated in the Cinque Giornate, it was ransacked by the population.

After the Italian Unification (1861), Luca Beltrami’s restoration work began: the few external fortifications were demolished, ditches were dug and the Rocchetta and the Filarete’s Tower were restored. From this moment onwards, the Castle took a cultural function and today it hosts five different museums. In particular, you should not miss: Michelangelo’s La Pietà Rondonini, the Civic collection of Applied Art with the Museum of Musical Instruments, the museum of Decorative Arts and the Egyptian museum which houses the Book of the Dead and some beautiful sarcophagis.