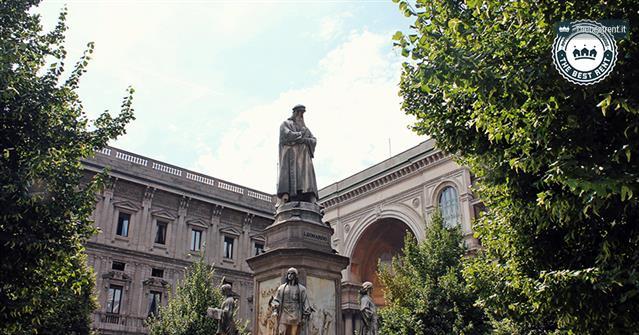 Connected to the Piazza del Duomo through the Galleria Vittorio Emanuele, Piazza della Scala is full of buildings with a great historical and artistic value. First and foremost, of course, the prestigious La Scala Opera House, designed by Piermarini between 1776 and 1778: the theater takes its name from the Church of Santa Maria alla Scala, in turn named like this to honor the memory of Regina della Scala, Bernabo Visconti’s wife. The church was demolished in the late eighteenth century to build the theater.

Then, another important building is Palazzo Marino, which has hosted Milan municipality seat since 1861. What you see in the middle of the square is a statue figuring Leonardo da Vinci, built in 1872 by Pietro Magni.

The square was built way after the Scala construction: visit La Scala museum to admire one of Inganni’s masterpieces portraying the theater, the carriages and some ladies walking down a street… yes, a street, not a square! Beltrami, in fact, built it together with the Commercial Bank building, which now doesn’t treasure money but instead Le Gallerie d’Italia, a beautiful museum, not as much known as it deserves.

The museum in 100% free, from the entrance ticket to the audio guides. Visiting it is a unique experience, not only for the works of art it contains, but also for the palaces in which it is hosted: one is the Anguissola palace, dating back to the eighteen century, where you can admire the cycle From Canova to Boccioni ; then the Beltrami palace, alias the ex Commercial Bank, of which you can still contemplate the original turnstiles and caveau. In the Palazzo Anguissola courtyard, Arnaldo Pomodoro’s Disco della Rosa dei Venti welcomes the guests. This is one of the best museums in Milan… an experience you shouldn’t miss by all means!