A church setting of a murder: Santo Stefano in Brolo 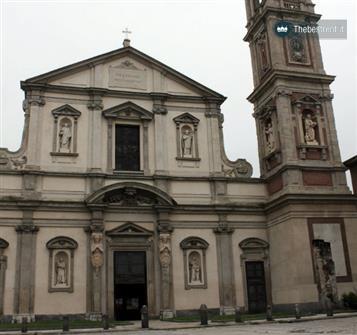 The church of Santo Stefano in Brolo dates back to the V century but a fire destroyed it in 1075 and only Carlo Borromeo had it re-built. The name brolo comes from the area next to it that was once a big garden. The church treasures some notable frescos, like Procaccini’s La Pietà and Il Martirio di Teodoro, but it is known mainly for the cruel murder that took place in it. Let’s take our magnifying lens and our notepads and let’s try to solve this crime together.

Francesco Sforza and Bianca Maria Visconti got married in 1450. After the construction of the Santa Maria Maggiore Church and of the Ca’ Granda, the young couple decided to take some time for their own. Shortly after, Bianca Maria gave birth to three wannabe heirs: Ludovico, Ascanio and Galeazzo Maria Sforza. When her beloved husband died, Galeazzo became Duke, but his lascivious way of living led to severe criticism. So, instead of talking quietly the matter out, on 26th december 1476, while Galeazzo and his brothers were heading towards Santo Stefano to assist at the Mass, the new Duke was assaulted and assassinated: the gravestone that recalls this event is still visible and placed at the principal entrance. With Galeazzo dead, Ludovico, known as Il Moro, became Duke and reigned in Milan from 1480 to 1499. Although there are no evidences that testify Ludovico’s guilt and although in these circumstances it is always the butler’s fault, everything seems to indicate the fratricide. Have a look at your notepads and tell me if we missed something and if we are wrong.