Six place to visit near Milan 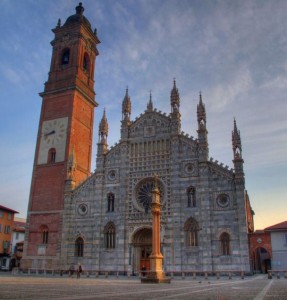 During the summertime, Milan may reveal to be hot like hell. So, if it is too hot and you have enough to explore this city we suggest you to go visit other centres near Milan. If you want to chill out in places where the weather is cooler and the temperature lower, here you find our tips about some zones near Milan rich with history, art and beautiful landscapes. We have chosen six places to visit near Milan. Read carefully this article and you will not regret from choosing this text instead of any short travel guide to Milan!

Monza – the city of Agilulfo and Teodolinda

If you think that Monza is well-known only for its racetrack, you are wrong. Just 25 kilometers far from Milan, Monza is a city to discover, rich with art and history. First of all, you cannot miss visiting the Dome of this city. Dating back to 1300, the year of the first Christian Jubilee, this structure was built thanks to the queen Teodolinda, the wife of king Agilulfo. In this church, there is a chapel dedicated to the queen, where is also conserved her crown, called Corona Ferrea (i.e. iron crown). Notwithstanding the fact that the crown is made of gold, it draws its name from the nail in it: legend has it that this nail was taken from Jesus Christ’s crucifixion and put in the crown. This is the reason why this jewel was considered a holy object and was always used by Italian kings during the rite of coronation. Furthermore, you cannot miss visiting the Arengario, which dates back to 1290. In the Medieval times, this palace was a prison, while nowadays it is a place used for setting up exhibitions. Last but not least, try some Perle di Teodolinda (i.e. Teodolinda’s pearls), which are delicious sweets whose shape and color resemble the queen’s jewels.

Bergamo Alta – the city of Mille

Another city near Milan, which is a real work of art as well as a piece of Italian history is Bergamo Alta. Start your trip from Milan, drive for 50 kilometers and you will get to Bergamo. The low part of the city has nothing special – it is a modern, neat city. But do not despair: if you keep on exploring Bergamo, you will be rewarded. Hop on the funicular and you will reach the higher zone in a few minutes – you will find yourself in another epoch! Walk along the narrow streets covered by cobblestones until you find something which will take your breath away: the Dome and the church of St. Pancrazio. Cross the Piazzetta della Cittadella, where there is the Torre dell’Adalberto (i.e. the tower of Adalberto), dating back to XII century, and you will find a real heap of art and history: the neo-classic Dome, the Baptistery and the Basilica di Santa Maria Maggiore, which are all placed in the piazzetta del Duomo. Look at all the colors and marquetry, which characterize these structures and then take a stroll in the streets of this beautiful city. You will not want to leave anymore. Speaking of departures, did you know that Bergamo is also called the city of Mille? This name derives from the high number of people from Bergamo in Garibaldi’s expedition, known as the spedizione dei Mille (i.e. the expedition of one thousand people).

If you want to visit the places of “that branch of the Lake of Como, which turns toward the south between two

unbroken chains of mountains” we suggest you to go to Lecco. Starting from here it is possible to visit the so-called “Manzonian places”, where you will find the atmospheres of the characters living in the pages of Manzoni’s masterpiece. Visit the Tabernacolo dei Bravi, the Foce del Bione, from which Manzoni drew inspiration to write the passage of “farewell to the mountains” or the Innominato’s Castle in Somasca. Renzo and Lucia aside, if you want to explore Lecco, which can be reached with a 60 kilometers trip, we suggest you to visit the neo-classic Basil of St. Nicolò, first. Go visit the Ponte Azzone Visconti too, which was built between 1336 and 1338, and the Palazzo delle Paure (i.e. the palace of terror), whose name comes from the fact that in this building there were the Tax Office, the land registry and the customs up to 1964. Also Villa Manzoni is worth a visit too. This beautiful Italian villa is placed in the neighborhood of Castellotto, where the writer spent his childhood and youth.

Lago d’Orta – the lake with an island in the middle

With this destination, we leave Lombardy to go to Piedmont. Do not panic, the distance between these two regions are not big – start from Milan, drive for 100 kilometers and you get to Lago d’Orta. This place is quieter than the famous Lago Maggiore and it is also famous because it is the place where the Italian writer Gianni Rodari was born as well as the place where Nietzsche and his flame Lou Andreas Salomè met. Start with a visit to borgo di Orta, where you can find a real architectonical masterpiece: the palace of Riviera di San Giulio. Go ahead visiting this zone and explore the nature reserve of Sacro Monte di Orta, which is placed on a hill and overlooks the whole borgo. In the afternoon, go visit the real protagonist of this area: the island of St. Giulio. Hop on a boat, set sail and visit the gorgeous Basil of San Giulio, where you can find the relics of St. Giulio. At the end of the day, enjoy the sunset from this magic island.

Would you like going somewhere more distant but that you definitely cannot miss? Hop in your car. This place is 130 kilometers far from Milan: we are talking about the well-known Lago di Garda and its magic places and atmospheres. First of all, we suggest you to go to the spa in Sirmione: here you will find awesome landscapes as well as a great place where relaxing after a whole year of work. If you want to stay near the lake, we warmly suggest you to go to Gargnano: here you will find yourself in villages, which are still the same as those of the ancient times, also thanks to the nice Church of St. Giacomo, dating back to XII century. After diving in the lake or relaxing at the spa in Sirmione, go explore the inner zones of the lake. In particular, we suggest you to go see the tower of St. Martino. This place is a symbol of Italian history, since it was the point of contention between the French-Sardinian army and the Austrian army, which fought in 1859 in the famous battle of San Martino, which was the last battle of the second independence war.

Mantova – the city which is part of Intangible Cultural Heritage

150 kilometers far from Milan, there is a centre, which in 2008 has been declared part of the Intangible Cultural Heritage by Unesco: Mantova. As a consequence, you cannot miss visiting this city. First, we suggest you to visit the Castle of San Giorgio, built at the end of 1300s and partially frescped by Andrea Mantegna. Also the Palazzo Ducale, where the family of Gonzaga used to live during the XIV century, and the Church of St. Maria del Gradaro are worth a visit. Built in 1260, this structure is characterized by a Romanesque-gothic style and is placed where St Longino the centurion was martyrized. If you are asking yourself who he was, St. Longino is famous for having brought to Mantova Jesus’ blood, which is stored in the above-mentioned church.

As we promised, the zones near Milan are rich with history, art and culture as well as places where relaxing after a year of work and responsibilities. Now, you have enough information to decide where to go and to plan some possible itineraries. So, get in your car, fill up the gas tank and… hit the road!