A night out surrounded by the San Lorenzo Colomnade 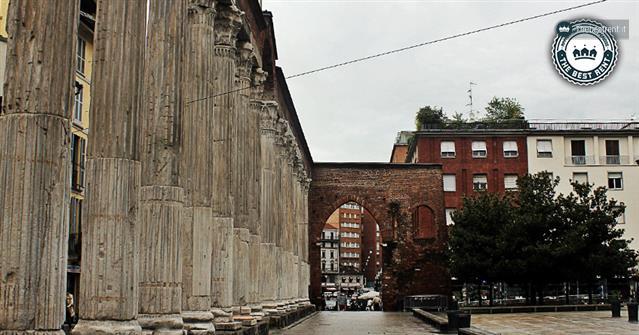 Sixteen marble columns, about seven feet high, with Corinthian capitals, perfectly aligned one to the other in front of the Basilica of San Lorenzo. Another surviving relic of the imperial Milan and one of the points of aggregation preferred by the Milanese. In this historical context, in fact, you will see lots of people gathering, chatting and drinking a cocktail or a beer.

Let’s see how an ordinary night at the Colonne develops. First, you have to have a little bit of spirit of adaptation. The rule of “first come, first served” here, in fact, reigns. The first to arrive will be able to conquer the best seats, that is to say the space between a column and the other or the benches. The others will sit on the steps of the basilica and the last ones will gather in circles and sit on the ground. With the Basilica at your back and moving towards the left side of the square, you’ll find two small bars, one in front of the other. Both have more than affordable prices: for 5/6 € bartenders will make you a cocktail that, trust me, will be enough for the whole evening because of its high alcoholic percentage. Grab your cocktail or alternatively your beer and go to your friends who, hopefully, in the meantime have found a place where to sit. Now, you just need to talk with your neighbors of ground/bench/column and wait for the two highlights that every evening take place in here. First of all, the arrival of the bongo-players, a group of young Africans with their bongos who give the right rhythm to the evening. And then, the moment when the whole square will gather in a round of applause, completely meaningless, directed by a bizarre character who arrives on time every night with the sole intent to blow up the square into applauses and merrily shouts.

In short, if someone tells you “are we going to Colonne tonight?” keep in mind that they are implicitly asking you to spend an evening as we have just described it to you, and keep in mind that “no, I’m not going” will not be accepted as an answer: you might pass by, grab a cocktail and then go somewhere else, but Colonne is one of the unavoidable stops of a Milanese night out!

Posted in By Night