The ancient Merchant Square of Milan 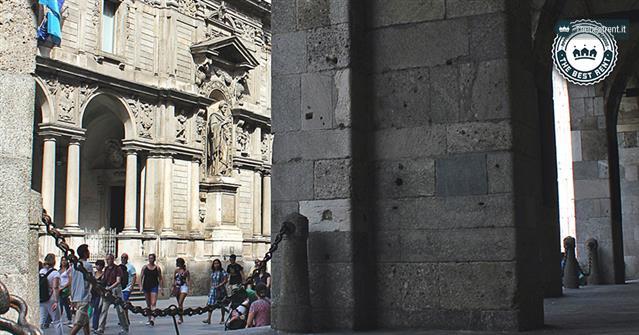 A few meters away from the Duomo but a bit hidden with wide arches and a medieval atmosphere: this is the Merchant Square, built in the mid-thirteenth century and whose function is easy to understand from its name.

The buildings surrounding the square are:

• The Palazzo della Ragione, used for judicial activities, the second broletto of Milan known as the Nuovo

• The Loggia Osii, built in 1316 because Matteo Visconti wanted a system of arcades around the Palazzo della Ragione in which legal and notarial activities had to take place

• The House of Panigarola, the notaries’ headquarter

It’s interesting to note that, nestled in the second arch of the Palazzo della Ragione, there is a bas-relief of the Semilanuta Scrofa, dating back to the fourth century. A.D and symbol of Milan. The Roman symbol is a she-wolf, the Milanese one is a sow… why such a graceless animal? Well, the legend says that the Celtic Belloveso, who arrived in the Po Valley, saw a sow during his sleep: the sow was considered a symbol of prosperity and wealth and therefore Belloveso decided to settle there and give life to Mediolanum.